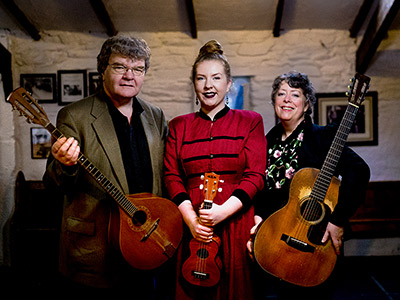 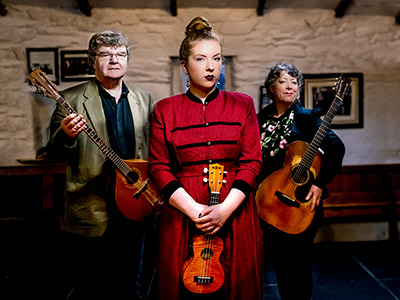 GREENSHINE’S THIRD ALBUM ‘FAMILY’
In the run up to the release of their third album ‘FAMILY’, the trio released two singles from the collection – Dandelion Seed and The Good Is Gone.
Dandelion Seed saw Greenshine’s star rise even further with the song being retained on the RTE Radio 1 Recommends list for 4 weeks and at the No.1 spot on the stations Airplay Chart for over a month. The band performed the song and were interviewed live by Sean O Rourke on the Today Show. Their follow up single The Good is Gone emulated the success of previous singles for the band enjoying the top spot on the Airplay Chart for several weeks. June 2019 sees the release of ‘FAMILY’.

THE GIRL IN THE LAVENDER DRESS was Greenshine’s second album the title track which they released as a single went on to garner a much larger following for the trio. The song gathered kudos from press, broadcasters and peers alike including songwriter Ron Sexsmith who said of the song:
“”Wow. Stunning song. Beautiful melody and words,” while Fiachna Ó Braoináin of Hot House Flowers said:”One of my favourite songs of the year.” Aonghus McAnally national broadcaster said it was: “One of the most creative things to come out of Ireland for quite a while.” The single went on to be rest at No. 1 for a month of the Summer on RTERadio1’s Airplay Chart and was 3rd most played Irish track on the station for the year. It reached No. 1 in the iTunes Ireland Singer Songwriter Charts. Their next single SHADOWLAND continued the band’s upward trend with Jim Lockhart of Horslips commenting: ” It’s lovely – tasty horn and really nice writing and performance.” The song was playlisted on stations around the country and, again, received much airplay on RTE Radio 1 earning them an interview and live 2 song performance on RTE’s flagship arts show Arena. The third single released from the album was CITY OF DREAMS and people were fascinated by the story of the song which was inspired by Kurt Cobain and Nirvana’s trip to play in Cork, the effect the visit had on him spiritually, and his subsequent discovery of Cork roots after an investigation sparked by the trip.

“This is a gorgeous album ~ the Sound of a Family immersed in music, tight in harmony, in love with song. Shine on Greenshine.” –  Christy Moore

“I recommend this gorgeous cd. I loved it instantly and have been listening to it constantly. I love the choice of songs and most of all Mary and Noel’s own songs ~ really beautiful voices and effortless singing. Lovely and refreshing.” – Sharon Shannon

“Greenshine haven’t so much put out an album of traditional music as they have a set of diverse influences brought to bear on a traditional sensibility. The result is a “modern folk” album that anyone who appreciates good music will enjoy. Greene writes lovely songs and Greenshine has done well in realizing them. The group’s originals, including “Dancing with the Flame” (Noel Shine & Jo Tobin) and “Lift the Ceiling”, really distinguish the album and provide a positive message of perserverance and uplift. I find myself drawn to Ellie Shine’s voice in particular. She’s brilliant on “Dream a little Dream of Me” and “Thugamar Fein an Samhradh Linn”. As someone who grew up playing Nintendo, I also really appreciated her lead on the group’s ukulele and banjo soaked version of Sam Hart’s “Mario Kart Lovesong.”

Greenshine is an album that should have broad appeal and folks interested in the modern folk sound will thoroughly enjoy their accessible approach.” –  Daniel Neely, The Irish Echo, New York.

GREENSHINE is a family trio comprising Noel Shine, Mary Greene and their daughter Ellie. Their material straddles the boundaries of contemporary, folk and roots and includes many self-penned songs. Their fast picking and close harmonies are a treat to the ear. Noel is a multi-instrumentalist, turning his hand to guitar, bass, mandolin, bouzouki and traditional whistle and this musical dexterity had seen him much in demand as a session and band player by artists as diverse as The Clancy Brothers and Tommy Makem and funk and soul legends The Republic of Loose amongst many others. Mary brings rhythm guitar to the mix and her voice is a wonderfully versatile instrument. She is much in demand for her recording session work and has added her talents to the albums of Christy Moore, John Spillane, Mick Hanly and Frances Black as well as cult psychedelic outfit Dr. Strangely Strange. As a duo, Noel and Mary have released 3 critically acclaimed albums to date ~ The Land You Love the Best (placed no. 3 in The Irish Times Folk albums of the year of its release), Unspoken Lines (described as ‘The heart and soul of folk music, coming from a deeper well…,’ by John Spillane) while Mary’s solo, Sea of Hearts, earned an impressive 8 out of 10 in Hot Press.

Ellie Shine has grown up surrounded by music and has been performing in concerts and festivals since the age of 13 including an appearance with GREENSHINE for President Michael D. Higgins and his wife Sabina at The Abbey Theatre. Despite her tender years, Ellie has featured on 4 recordings to date. She has a huge interest in the songs of the Muskerry Gaeltacht and reached the All-Ireland final of Fleadh Cheoil na hEireann’s under 15 Sean-Nós Singing competition in her debut try-out. She enjoys singing songs of all genres and has a special place in her heart reserved for classic Beatles and country as well as good contemporary songwriting. She accompanies herself on the ukulele.

The music of Greenshine has been covered by several Irish music artists and has been used commercially by Follain Preserves in their ad campaigns, Carrie Crowley in her film Waterway and as signature tunes by several national radio station programmes.

House concerts are a stable and long standing component of the music scene in the U. S, Canada, and elsewhere. Not so much in Ireland, but, on this evidence, what a crying shame.

Greenshine is a three piece family band, composed of Mary Greene and Noel Shine, both veterans of the acoustic Irish music scene, who have recently been joined by their daughter Ellie. Noel and Mary have been blurring the boundaries between folk, Americana, and bluegrass for years now, their interactions tuneful, inventive and compelling. No surprise, then, to note that Ellie fits in beautifully, bringing an even greater freshness to the dynamic that is family music. There is something elemental that emanates from the music when it springs from the most intimate of connections.

Kicking off with Mary’s version of Dylan’s “Don’t Think Twice”, sourced from her old friend Gerry Power of Dunmore East, what followed was a two and a half hour odyssey through tradition, original song, and a cheesy Dean Martin cover for good measure! It is difficult to describe just how good this music was, but I’ll try. “Shadow and Sun”, replete with gorgeous guitar work between the breaks, was a standout example of how beautiful understated female harmonies can be -and how effective. A song about missing people from the trio’s new album, it deserves a cover version from a major artist.

Ellie stepped into the spotlight for the first -but not last – time of the evening with “Dream A Little Dream Of Me”, showing a formidable vocal prowess, which , with greater exposure , will become even more obvious. Later ,Noel , fingerpicking beautifully, gave a stomping version of “Working on The Railroad”, he and Ellie swapping verses , and the band working heavenly three part harmony on the chorus.

I took copious notes as an aide memoire, but several days, and twenty eight songs later, I can remember almost every detail of the evening as if it were in the now. This was music, played to the most appreciative audience I’ve been a part of for some time, of the highest quality. During the interval, our hosts, Pat and Rita, went round with wine, beer, sweet cake and brown bread for all their guests. All told, an evening of pure magic, music that went straight to the heart, and not an amp or microphone in sight. I’ll tell ye something-I could get used to this kind of evening handy enough!

The following are the thoughts of a number of concert goers after a recent Greenshine concert:

“Great gig. Anybody that gets a chance to go see Greenshine, they should.”

“Cheolchoirm den scoth anseo san IC!! We were all delighted with the Greenshine concert.”

“I just got home after the wonderful greenshine concert. Thank you, Mary, for dedicating Dancing Boy to me! I love your arrangement of ‘Don’t Think Twice’. Ellie is a star, Noel a virtuoso. You’re amazing.”

“I just got home from the Greenshine concert in Ionad, fantastic world class music & songs, brilliant night, thanks.”